NEWS - How Black Week Is (Or Isn't) Shaping Up

LET US NOT FORGET... 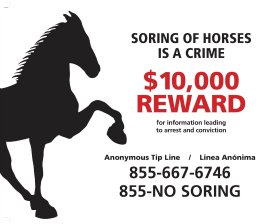 Well, as I suspected, we're seeing LOTS of violations, which means LOTS of classes that have low entries.  The average as of the end of Saturday, 8/25/12, is 10.8 horses per class.  It's pretty easy to find all this information--the Walking Horse Chat and the Walking Horse Report are reporting daily the results and information that clearly shows the horse is getting some major help this year.

Here are reports from a board member from the Celebration, David Howard, as posted on the Walking Horse Chat.  My comments are in green.

Violations:
Bilateral - 2
Unilateral - 1
Scar rule - 2 (1 preshow - 1 post show)
Foreign substance - 2
Illegal shoeing - 1
Bad image - 2
USDA inspected 77 horses, 56 preshow and 21 post show.
Preshow violations - 15
Post show violations - 3
Total violations - 18 (some originally written by SHOW)
VMO Baker checked 35 horses and wrote 9 tickets
VMO Dessault checked 41 horses and wrote 10 tickets
VMO Southerland checked 1 horse and wrote no violations.
Bear in mind some of these tickets were originally cited by SHOW.
These numbers are compiled right after the show and may not be exact. They will be adjusted after being reviewed by SHOW.  That's a given! But look at it this way: is SHOW suspending those horses and those trainers, owners and exhibitors from participating in the remainder of the show?  If they are so transparent, and agree with the trainers initiative as to suspending for foreign substance, shouldn't the same hold true for bilaterals, unilaterals, scars, etc.?   Why aren't those names and the horses names being released to the media?

My favorite part of that statement, though, is that the implication that the USDA's results are wrong.  They've already posted information that the first day of swabbing was "clean" (which, of course, was only flat shod classes and model classes--no need for chemical soring there).  Basically, what they're doing is swabbing the horses themselves, and sending them to a community college for vet techs--who, for the record, are not officially trained on how to use a GC/MS machine in their veterinarian training--in plastic baggies with no chain of custody and no experience in how to do swabs.

A professional laboratory who has decades of work with GC/MS, approved by the government, and using OSHA-approved methods to collect samples without contamination.

A bunch of HPA violators that are members of a group formed this year of people who have never had experience taking samples and sending them without using OSHA-approved methods to a community college to have people who are not trained in GC/MS practices.

Which one would you listen to?

howarddavidl
Posted on:  8/25/2012 9:19:50 AM
SHOW inspected 175 horses Friday evening and wrote 9 violations:
Bilateral - 2
Unilateral - 1
Scar rule - 4
Foreign substance - 1
Low chain - 1
USDA inspected 80 horses and wrote 20 violations, 9 generated by SHOW and included 1 pulled out of a barn prior to the show.
Foreign substance - 1
Unilateral - 5
Rotation - 1
Scar rule - 12
Bilateral - 2
Low chain - 1
USDA numbers are unofficial.  This is most likely because they hadn't been compiled and given to him yet by the time he made this post, not that they're trying to "hide" anything.

howarddavidl
Posted on:  8/25/2012 9:23:43 AM
Barney Davis, who is on a lifetime suspension from SHOW, was in Champions Arena observing inspection and talking on a phone apparently to a lady with USDA who was with Dr. Rachel Cezar. Officials are checking to see the terms of Davis' suspension and whether or not he is allowed on the grounds.
The Celebration will look guilty as sin if they try to ban Barney Davis from the grounds now. Quite frankly, people who are suspended can absolutely partcipate as a spectator on the show grounds.  BUT REMEMBER: part of Davis' deal was to work with the USDA to help identify violators.  Gosh, those DARN loopholes designed to let the trainers and violators still go to shows!

But, the Celebration made themselves look stupid in the end: they banned Davis from the show grounds because of his past violations.  So my question is why didn't Inman ban himself?  He has two violations, after all!
howarddavidl
Posted on:  8/25/2012 9:26:22 AM
USDA was so busy checking pre-show, they did not inspect 2nd and 3rd place horses. USDA checked 80 of 175 horses pre-show or 46%.
howarddavidl
Posted on:  8/25/2012 9:49:26 AM
From day one the USDA has objected to the media access area in the inspection station. This area was selected by Purple Strategies, the TWSHO Public Relations firm. The Celebration has refused to move the site since they are trying to give the media an up close look at inspections by SHOW and the USDA.
Most reporters are escorted into the area and only stay for a short period of time. There are a lot of misconceptions about inspections and Purple Strategies wanted to expose reporters to an actual inspection.  Of course they did.  THEY ARE PAID TO MAKE THE INDUSTRY LOOK GOOD.  DUH!  And there ARE a lot of misconceptions about inspections, and all of them have been created by industry leaders to con the public and media and to keep owners, exhibitors and some trainers confused.  It's all a ploy to support their mean old government claim.  Just like DH saying the USDA issues tickets - the USDA do not issue tickets, they take information for potential prosecution.
And now USDA is putting a horse in timeout in every class and the horse in time out is always placed strategically in front of the camera that is filming the USDA inspections.   OH I LOVE THIS.  That is SO smart!  There is no reason why there should be media filming this stuff.  They don't need to be.  SHOW is filming it, the USDA are filming it, and the owner of the horse is allowed to film it.  It's just a marketing ploy by PS, and the USDA isn't falling for it.
SHOW has not objected to the camera or media access area and SHOW President Dr. Steve Mullins is made available to the press to answer their questions every day. SHOW is also releasing to the media the inspection statistics and the Trainers' Association and TWSHO are releasing the swabbing results.  SHOW isn't objecting to the cameras because the dumb ass press are lapping up the PS spin and are probably hand picked by the industry.
The industry has nothing to hide.
The industry has nothing to hide?  They are hiding it in plain view.  If they TRULY have nothing to hide, they would release the names of the owners, trainers, exhibitors and horses that SHOW and the USDA have found in violation to the press.  They have stated over and over again they want the cheating trainers out--then publicly expose those trainers!  Make them out to be the bad guys they truly are!   They can't use the due process or appeals excuse if they are releasing the swab results, so now they have no excuse. Otherwise, it will be just like last year, where the overwhelming majority of exhibitors, trainers and owners, after having been found in violation early on in the Celebration, so SHOW and the Celebration allowed them to continue to show.   SHOW and TWSHO are not releasing the names because of the new mandated penalities, which say that any horse found sored and its trainer, owner, etc. are to be disqualified from the rest of the show.
What's even more interesting is that these statistics Howard is putting out are on mostly flat shod and halter classes.  This proves beyond a shadow of doubt the majority of violations occur during the padded classes.  I would love to see what classes those foreign substance results were in!

So technically, the most expensive horse that sold was $3500.  There's a HUGE gap between the mare that has possibly been sold for $10K.  But mark my words: if she DID sell for $10K, the industry is going to be all over it, but fail to mention that the next highest sale was $3500!  And check out number 99: safe in foal to the 2010 WGC, AND NO ONE WANTS HER.  Now that should make all of us laugh!

So, as usual, the farce continues.  SHOW and their evil minions are trying to keep the sore horses in the ring; the USDA is trying to get them out.  Will this freak show ever end?
Posted by For the Tennessee Walking Horse at 11:37 PM