Here's today's press release by the Blount County SPCA.  I've included the text below since this is a bit hard to read.  Please note: this does NOT mean that the case is going to go to the Grand Jury, but at least work is being done to try to get it there!  DON'T FORGET to call Mike Flynn this week and ask for him to get this to the GJ!  This is the perfect time to do it--the Lickers are too busy moaning over the Celebration. 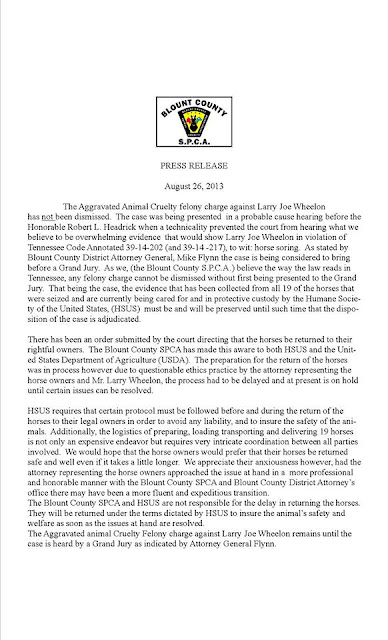 The Aggravated Animal Cruelty felony charge against Larry Joe Wheelon has not been dismissed. The case was being presented in a probable cause hearing before the Honorable Robert L. Headrick when a technicality prevented the court from hearing what we believe to be overwhelming evidence that would show Larry Joe Wheelon in violation of Tennessee Code Annotated 39-14-202 (and 39-14 -217), to wit: horse soring. As stated by Blount County District Attorney General, Mike Flynn the case is being considered to bring before a Grand Jury. As we, (the Blount County S.P.C.A.) believe the way the law reads in Tennessee, any felony charge cannot be dismissed without first being presented to the Grand Jury. That being the case, the evidence that has been collected from all 19 of the horses that were seized and are currently being cared for and in protective custody by the Humane Society of the United States, (HSUS) must be and will be preserved until such time that the disposition of the case is adjudicated.

There has been an order submitted by the court directing that the horses be returned to their rightful owners. The Blount County SPCA has made this aware to both HSUS and the United States Department of Agriculture (USDA). The preparation for the return of the horses was in process however due to questionable ethics practice by the attorney representing the horse owners and Mr. Larry Wheelon, the process had to be delayed and at present is on hold until certain issues can be resolved.

HSUS requires that certain protocol must be followed before and during the return of the horses to their legal owners in order to avoid any liability, and to insure the safety of the animals. Additionally, the logistics of preparing, loading transporting and delivering 19 horses is not only an expensive endeavor but requires very intricate coordination between all parties involved. We would hope that the horse owners would prefer that their horses be returned safe and well even if it takes a little longer. We appreciate their anxiousness however, had the attorney representing the horse owners approached the issue at hand in a more professional and honorable manner with the Blount County SPCA and Blount County District Attorney’s office there may have been a more fluent and expeditious transition.

The Blount County SPCA and HSUS are not responsible for the delay in returning the horses. They will be returned under the terms dictated by HSUS to insure the animal’s safety and welfare as soon as the issues at hand are resolved.

The Aggravated animal Cruelty Felony charge against Larry Joe Wheelon remains until the case is heard by a Grand Jury as indicated by Attorney General Flynn.
Posted by For the Tennessee Walking Horse at 12:13 PM