NEWS - The Walk on Washington Was a Success

While the sore side continues to flail and flop like fish out of water and cannot seem to get their proverbial sh*t together, the sound horse group continues to work so hard and get success from their actions.

Billy Go Boy really has the best posts about the event, so I highly recommend going to his website to read everything.  www.billygoboy.com

Some important notes are that about 75 spectators showed up (not many more than those at a Big Lick show).  But most importantly, the media was out in force!  Articles have shown up on ABC News, the Tennessean, CNN, and various other news outlets that were there.  Billy Go Boy has them posted on his site.  Let's see the sore side get that kind of support with their exhibitions.

I have also heard that since the event, four new co-sponsors have signed on to the PAST Act.  There is also talk about the Act getting to the Senate floor for vote.  I will update everyone once I find out more news if this is true.

Also, please read this post for sure, if you don't read anything else.  This is the story of Dutch, a horse that was noticed at a Pennsylvania auction in June of 2013 in horrible condition.  From the story I was originally told about this horse, the owner took him to the auction to sell him.  Luckily, people who knew what soring was took the original photos of his legs and feet in the auction barn.  The owner found out about it, snatched him up and took him away.  Obviously he knew it is illegal to have a scarred horse at an auction.  From what I heard, someone had gotten a license plate number.  The rest of the story is on the post.

Some sore side folks have made fun of the amount of horses being low.  But it's not like the Big Lick classes aren't big now.  Two to three horses per class does not constitute a full classes.

The only defense of the sore side is to make fun of the natural horse riders quite frankly showing their ignorance.  I invite everyone to take a gander at this post from Facebook off of the open page of Tommy Williams, who runs the Walking Horse Report and Walking Horse Chat, where crazy anti-HSUS theories abound and names they believe are insulting are slung about.  CLICK HERE.  For the record, I'm proud to be a tree hugger and rabid animal welfare activist.  Much better than being called and animal abuser or a felon supporter.

And finally, here's the picture circulating the Internet of Pam McKinney, the Virgina TWHBEA Director, who came to the WOW event and spent her time walking around and making nasty comments, her cronie trying to pass out anti-PAST Act propaganda (of which they were not authorized to do), and when she was confronted about it, this was her response, as well as dropping dozens of F-bombs.  She was escorted away from the exhibition by local police. 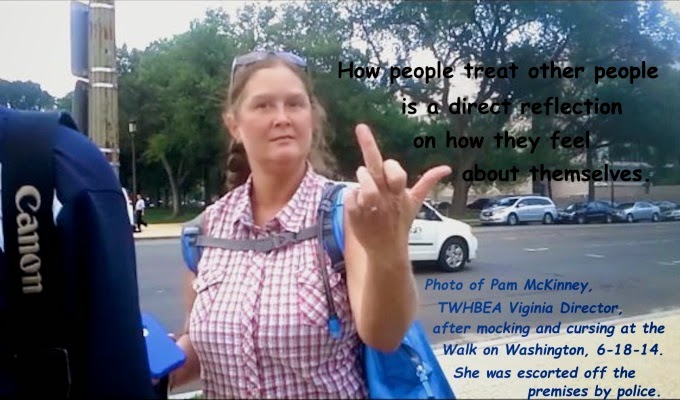 The reason I post this is to show folks how well we are doing to save the horse, and how the sore side cannot stand on its own two stacked and chained feet anymore.  We continue to make progress to save the horse.  Soring and the Big Lick are not only cruel but no longer popular in the horse world.  It's time for it to end, and I can't wait for the PAST Act to pass.

Check out the All American Walking Horse Alliance website and Facebook page to learn more about their time in DC.  And thanks to everyone who worked on this project AND who donated their time and money to it.  This is why the PAST Act will pass: we are willing to work hard and keep at it!
Posted by For the Tennessee Walking Horse at 8:02 PM